It was 2012. In Melbourne. It was awesome. And I’ve only just discovered it happened.

This is “Literature Versus Traffic“, an art installation by Luzinterruptus which was part of the Winter Light Festival. 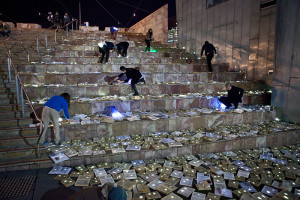 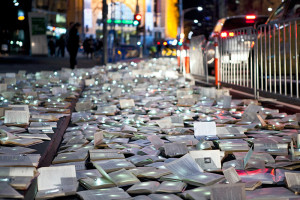 I am incredibly envious of anyone who was there.

The artist described it as “a river of books overflowing into the physical pedestrian spaces and installed itself in the space allocated to cars, stealing precious space to the dense traffic in the area, in a symbolic gesture in which literature took control of the streets and became the conquerer of the public space, offering the citizens, a space (not as big as we would have liked) in which the traffic withdrew yielding ground to the modest power of the written word.”

And on the last night people were allowed to take books home and books were handed out to passing cars!

Read an interview with Lazinterruptus here