The Samurai Kids journey to China to fulfil a promise Sensei Ki-Yaga made many years ago.

Long before Sensei Ki-Yaga built the Cockroach Ryu, he travelled to China and studied at the Shaolin Temple in the north-western Song Shan Mountains of China. Sensei promised to return to help the abbot in the Temple’s time of need. Telling the Samurai Kids that the abbott has a treasure in need of safekeeping, they set off on a journey to China. An historically accurate depiction of feudal Japan and China, this expertly researched series mixes action with historical information.

A reader’s father emailed to say Shaolin Tiger had changed his holiday plans. His son was reading this book on the plane travelling to China. He was determined to see a shaolin temple so his dad rearranged their holiday plan. Unfortunately the temple was a terrible tourist trap but the family had the best time of their holiday walking around the mountainside near the temple.

Yoshi’s voice booms across the deck, through the thick gloom and above the waves pounding against the hull. “Man overboard.”

I look around in panic. There are only two men on this boat. One of them is Sensei Ki-Yaga and the other is the ship’s master, Captain Oong.

I’m relieved to hear our teacher is safe, but I’m afraid for the captain. Not even a hardened sailor could survive long in this bad-tempered ocean.

“Fetch the lantern from our quarters,” Sensei calls to Taji. “Go quickly.”

Some people would think it strange to send a blind kid to find something, when every moment spent looking could be the difference between life and death. But Taji is more skilled at finding things in the dark than anyone else. It’s what he does every day.

People misjudge us all the time. One-armed Mikko and blind Taji. Yoshi, a samurai kid who refuses to fight. Kyoko with her bright white hair, six fingers and six toes. And one-legged me. Other people think being different makes us weak. But we know better. It makes us strong.

“I heard a splash here.” Yoshi points. “Then I heard Captain Oong cry out for help.”

Searching for movement, I peer across the angry waters. I am Niya Moto, the White Crane. By day my eyes can pick the flash of a fish scale from miles above the ocean. But it’s hard to see now. The dim moon reveals a landscape of dark shadows. Howling and blustering, the wind pummels them into grotesque shapes. Monsters rise and fall back into the waves.

Only one shadow isn’t changing form.

Fussell crafts strong, action-packed narratives that grab the reader’s attention from the first paragraph. Shaolin Tiger begins with a dramatic attempt to rescue a drowning sailor and many more adventures follow; yet the Samurai Kids series is all about character. Fussell’s writing – and not just in this series – always celebrates those who are different; she champions perseverance and endurance whilst encouraging teamwork, loyalty, courage and friendship. The Samurai Kids series uses the ancient traditions of the warrior training to promote ethical and honourable actions, compassionate and creative thinking and tolerance for all. All this in a rollicking good yarn expressed in concise prose sprinkled generously with humour. NSW Assoc. for Gifted and Talented Children 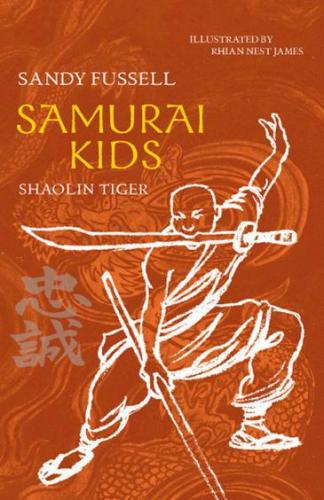 The Samurai Kids series uses the ancient traditions of the warrior training to promote ethical and honourable actions, compassionate and creative thinking and tolerance for all. All this in a rollicking good yarn expressed in concise prose sprinkled generously with humour. –  NSW Assoc for Gifted and Talented Children