The eighth and final instalment in a unique series about a special group of kids training in the ways of the samurai.

The Samurai Kids are finally back in Japan. But not at their ryu in the Tateyama Mountains. Instead, Sensei has taken them to the snowy lands of Ezo – the place of his birth. The place where Sensei must face his demons and right the terrible wrong that has tormented him. Will Niya have the courage to help Sensei as he promised? Is Sensei really a black Tengu?

Of all the Samurai Kids books this is my favourite. For most of the series (up to book 5 to be exact) I had no idea what terrible thing Sensei had done. I had an inkling and it grew stronger as the last book drew closer. But I always knew where Sensei was taking the Kids in the end. Home. To his home in Ezo (Hokkaido), where the story began long before even the first book. I love a setting of ice and snow and every good series should have at least one wolf.

Extract – Chapter One – The Castle

A harsh clang splits the silence and sends the wagtails scuttling from the trees. Bong-ong-ong.Slowly and ominously, the castle bell tolls across the snow-covered landscape.

From here, I can see Fuyama Castle clearly, its great black wooden turrets rising above the icy flatland. It’s not far but it’s hard to walk quickly in snowshoes, especially with one leg. Our steps are forced shorter, slower and wider . Every twenty paces, we have to stop and shake the snow from our wooden soles. The White Crane is tired of plodding. It wants to lift its feet off the ground and soar, wings outstretched across the sky. Aye-eee-yah . I scream deep in my soul, where only Sensei and I can hear.

“Why is the castle bell ringing?” Kyoko asks, twisting her hair around her first finger, the way she always does when something makes her nervous.

“It is nothing to worry about,” says Sensei. “Just a warning that the castle is closing its gates for the night.”

That is something to worry about. This island is home to the great higuma brown bear. It doesn’t run away from people like the smaller black bears that live near our ryu. The higuma stands and fights. We’re not going to reach the castle in time, and when the bears come out to feed in the twilight, they might find us.

Two months ago we boarded a trading ship in Phnom Penh. When our master told us we were going home, we thought he meant the Tateyama Mountains. But he meant Ezo, the island where he grew up. We sailed up the coast of China, past the Kingdom of Joseon and across the Sea of Japan, until we came to this cold, unwelcoming land.

We entered the harbour late in the afternoon, surging through the foam on the winter breath of the Ocean Dragon. Sensei stood at the prow, his gaze fixed on the white-capped peaks in the distance.

My friends think Sensei wants to see his birthplace. One last visit before our travelling ends. I know it’s much more than that. Something the Angkor abbot said made Sensei come here, in the middle of winter, when the land is harsh and hostile with snow. Something so important he couldn’t wait until spring. Here Sensei must right the terrible wrong that keeps him from sleep. If Sensei is a black Tengu, this is the place where it first spread its fledgling wings.

It was very fun. I loved everything about it. I loved finding out Sensie’s secrets and his past. It all worked so well. It followed, unlike most books and yet it was still and surprise. I couldn’t guess what his secret was before he reviled it! -Good Reads Five Stars – Mikyla (13)

But it’s the quiet, meaningful, zen-like story components that really set these books apart from other action series. I so love the ‘quiet’ between the words. – Kid’s Book Review 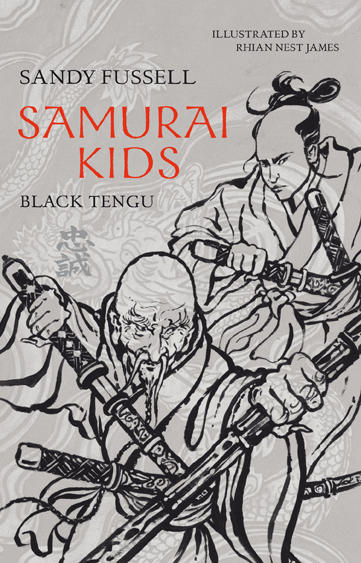 It’s the quiet, meaningful, zen-like story components that really set these books apart from other action series. I so love the ‘quiet’ between the words. – Kid’s Book Review