Imprisoned in a box, Atl waits for death. He is not afraid. Anger burns too deeply within him.

Then, unexpectedly, Atl is released to deliver an urgent message. But it is not the mission that sets him running. It is the sudden chance for freedom. Nothing can stop this Jaguar Warrior. Not even the one who hunts him.

I’ve always been fascinated by Pre Columbian South American history. In primary school I read books about the Aztecs and the Incas, fascinated by their world, so alient to mine. When I was in high school, studying Ancient History, I was excited to read in the paper about the excavation of Tempo de Mayor. I wanted to be there!

Years later I wrote Jaguar Warrior because I was still fascinated by a civilised cultured society whose beliefs, in particular ritual sacrifice, are today considered barbaric. Why did theMexica (Aztec people) see the world that way? For this reason I wrote Atl’s story in first person, present tense. And I wrote the story of Huemac, the Guard Captain who hunts him in third person to keep the reader at a distance initially but draw them closer as the lines between good and bad, then and now were blurred by the storytelling.

I wondered what it would be like to be a slave like Atl and what he might do if he had the opportunity to choose between the freedom he wanted and the duty he should fulfill.

Extract – Chapter One: Boy in the Box

“Why isn’t that boy dead yet?” When the Captain shouts, even the temple walls shiver.

Death is scary enough, without the Captain of the Temple Guard yelling about it. I’ve seen battalions of warriors cringe and cower beneath his bellowed orders. But I’m not afraid of the Captain and he doesn’t frighten the temple High Priest either. Ichtaca won’t let the Captain kill me. The priest is saving that task for himself.

For seven days I have been imprisoned in this windowless box, waiting to die. But I haven’t given up. Every morning I sharpen my fingernails against the wooden walls. My heart is strong like a jungle cat and when the box is finally opened, I’ll claw and bite the hand that holds me.

I was born on the day 3 Ocelotl, the day of the spotted jaguar. Deep inside, I feel the power of its spirit reaching out to help me.

“I will tell you when the sacrifice has been made.” Ichtaca’s voice is blunt but his authority is razor-sharp. I imagine the Captain glowering. Only the Golden King is more powerful than Ichtaca. Even a mighty Eagle Warrior must listen and obey the High Priest of the Serpent-Sun god.

I can’t see either man. But I know both well and in the darkness, I listen until every word is chiselled inside my head. Like now. I know the Captain’s thin lips have curled into a snarl. He despises me more than ever.

The hatred began long ago. It was only a small thing but in the Captain’s eyes, the insult to his honour was great and cut deep into his pride. Under the Mexica sun, a wound quickly festers and turns rotten.

When I was seven I dropped a serving bowl and hot turtle soup splashed onto the Captain’s bare leg. I will never forget that day. A slave cannot afford to make mistakes. Especially here, where clumsiness is paid for with blood.

“You stupid Purepechan idiot!” The Captain raised his sword to strike.

I knelt, head bowed before the blow.

From the opening pages to the climax, Jaguar Warrior will have your heart thumping. The hunt throughout is expertly paced and well-balanced with character reveals and historicla information…Guaranteed most children will inhale Jaguar Warrior in one sitting. Sun Herald

The tension and pace of this story keep you turning the pages, but for me, it was the well drawn characters and vivid detail that kept me reading when there were many other jobs I should have been doing.

Here’s an example of the evocative narrative – Atl is eating tortillas.

Eyes closed, I listen to my stomach purr. Old men say the jaguar spirit lives in a young warrior’s heart, but when I listen to my gut grown with contentment, I know that’s where the big cat crouches. And it likes corn cakes.

Humour and a strong character voice also endeared me to Atl and made me eager to know his fate. Kids Capers (Boomerang Books)

Set 500 years ago in Aztec Mexico, this gripping and gory adventure will have you on the edge of your seat! DMAG

…is a hero’s journey that avoids many of the cliches and overly familiar features of the form… The world he (Atl) travels through is exotic, dangerous and compelling. (Fussell allows) recorded history to dictate the broad strokes while (she fills) in the details. It is an approach that gives (her) story plenty of credibility. That (she) manages to build a story within a cultural or historical framework, without losing sight of an audience who wants a good yarn above all, is impressive. Viewpoint

What a page-turner: Aztec blood sacrifices, a ravenous crocodile, feisty companions, secret passages and a heart-stopping pursuit. Indiana Jones move over!…. It is not only the fascinating details of Aztec life in Mexica and the Spanish invasion of that civilisation that hold the reader captive – Atl and Lali are resourceful and engaging and their lively bickering provides welcome touches of humour as a counterpoint to their terror. Fussell manages to integrate facts (such as the position of women, the ritual of chocolate drinking and the spiritualism of the Aztecs) without ever breaking the tension of the narrative. Atl and the Captain speak alternatively, their voices vivid and compelling. The language is poetic yet riveting. Magpies

Alternating between the first person Atl’s perspective as well as third person from the pursuer Huemac, this story is not a cut and dried good versus evil tale. The pursuer, while shown as being harsh, is given depth which helps explain why he behaves the way he does: his motives are honourable according to the beliefs of the day. Atl matures considerably in the story as does to a lesser degree the other two children. Recommended for upper primary school and secondary readers. Our Patch Australia Reviews

One of Sandy’s many talents as an author, is to write about a period of history young readers may not be familiar with and bring it to life. … This is a fast moving, intriguing book, where not everything is at it seems and the true motives for some character’s actions aren’t immediately obvious. It is only when these kids begin to realise their own strengths and talents, as well as who to trust, that they also discover what is possible when they work together. Kids Books Canberra (ABC Radio Reviews)

Jaguar Warrior is a gripping historical novel for children, set in Aztec times. Told chiefly through Atl’s first person viewpoint, there are also key scenes from a second viewpoint character, the captain who pursues Atl. This second viewpoint creates suspense as the reader can see what Atl cannot – the pursuer and his plans – but at the same time it allows a level of empathy for this ‘baddie’, whose motives are shown as more well intended as would otherwise be thought. Set in a well researched, thoroughly believable world, this is a thrilling adventure which will appeal to upper primary and secondary readers. Brilliant. Aussie Reviews

My son tells me that the books are full of adventure, humour, and great descriptions of life in feudal Japan, and in the early weeks of grade six, he read the entire series over a few days. Now that he has started secondary school, I thought that he might find Sandy’s new book set in South America in the era of the Aztecs too young for him, but he consumed Jaguar Warrior in one day, even giving up TV so that he could read it. I think that this goes to show what a great story teller Sandy is. Bayside Reader blog

Fussell has written a story about trust and friendship, set at the time of the Spanish overthrow of the Aztec civilization, but it could be at any time in any place, its themes are so universal. ReadPlus

A mysterious adventure, this book is intriguing from start to finish. Recommended for kids 10+ Domain Books Blog (Domain Books)

This book, set in Aztec time, was another riveting read. It is fantastic; face-paced, full of action and suspense with great descriptions. Boys will really love reading this book as they hook on to the character of Atl. Girls will love the heroine Lali. She is strong and not afraid to speak her mind. New Books in Oz

Who would you trust? Things are not always as they seem. Villains have a habit of transforming into the unexpected in Sandy Fussell’s tales and Jaguar Warrior is no exception. The Reading Stack (Guest Review)

From the moment I waited inside that box with Atl, I plunged into an adventure that had me breathless with excitement, concern, fear, and anger. I ran with the children as they sought to escape their determined enemy, The Captain, and willed them to succeed in their mission. Any child who is looking for a riveting story with characters he can relate to, packed with action, need look no further. Jaguar Warrior has it all! And even though I forgot at times to breathe, there were also moments that made me laugh aloud, then look nervously over my shoulder in case The Captain was creeping up on me. Book Chook Reviews 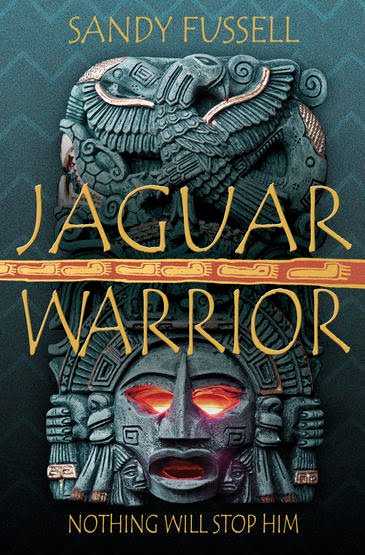 WEB QUEST: A DAY IN THE LIFE OF TENOCHTITLAN (366kb)

What a page-turner: Aztec blood sacrifices, a ravenous crocodile, feisty companions, secret passages and a heart-stopping pursuit. Indiana Jones move over! Fussell manages to integrate facts without ever breaking the tension of the narrative. Atl and the Captain speak alternatively, their voices vivid and compelling. The language is poetic yet riveting. -Magpies