The Rescue Agent Team (or RATs, as they like to call themselves) want to save the world. Where better to start than in their home town of Boggabilla? Someone is stealing cartons of milk from all over town. The RATs are determined to capture the Milk Mugger but they are in for a big surprise when they discover the identity of the thief.

Read an extract from Ratbags

As usual, no-one was listening to me. Liam was pulling silly faces and Muzza was laughing his head off. Muzza laughs like ten chickens cackling at once. Bok. Bok-bok. Bok.

That made them stop and listen.

‘Who are you calling a RAT?’ asked Liam.

‘All of us. We’re the Rescue Agent Team. That makes us RATs’.

‘I like it,’ said Muzza. ‘RATS are cool. They’re sneaky. And they make girls scream.’

‘Yeah,’ agreed Liam. ‘RATs are smart. They can smell cheese from miles away.’

Liam had this thing about cheese. Cheese on toast, cheese sandwiches and cheese sticks in his lunch box. He was born to be a RAT.

Muzza and Liam are my best friends. The three of us live in the same street. We always meet in my garage after school. Unless it’s really hot. Then we go to the pool.

Liam is crazy. He has long black hair he ties up in a pony tail. Like a girl. He thinks it makes him look like a ninja. Muzza has curly hair and freckles. He’s a killer on the football field. Once he scored seven tries in one game and knocked over the goal posts. 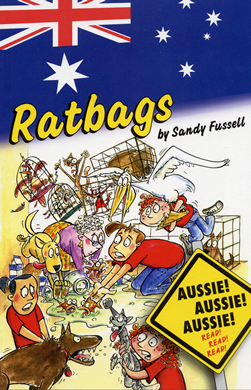