This is a blog post from my Posts from Posts series where other people’s blog posts and web site content inspire me to write a blog post of my own.

One of the main reasons I love Twitter, is because it’s a gateway for discovering and learning new things. One of my early discoveries was Incidental Comics drawn by Grant Snider (@grantdraws).

My all time favourite @grantdraws comic. I want this chiselled on my headstone! or that box they put your ashes in. Either way I’m taking this with me. Inspiration https://t.co/V7uVBaqLHy pic.twitter.com/VWREYuqnS6

I visit the Incidental Comics website every week and pin my favourites to a Pinterest Board called Comics for Creatives (along with the work of others I admire).

They’re comics that speak to heart and soul of a creative person, especially one who loves to create with words

The website is a place I can always go to for inspiration, motivation and a laugh. They’re comics that speak to heart and soul of a creative person and especially one who loves to create with words. When Grant’s first book came out in 2017, I broke my ‘Australian only’ bookstore rules and ordered eight copies from an online overseas store (not Amazon!). I just couldn’t wait the extra months for the book to reach Australia. I’ve since gifted seven copies to friends for Christmas. 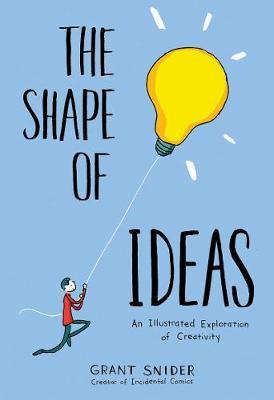 For Christmas, for myself, I received a copy of the calendar. 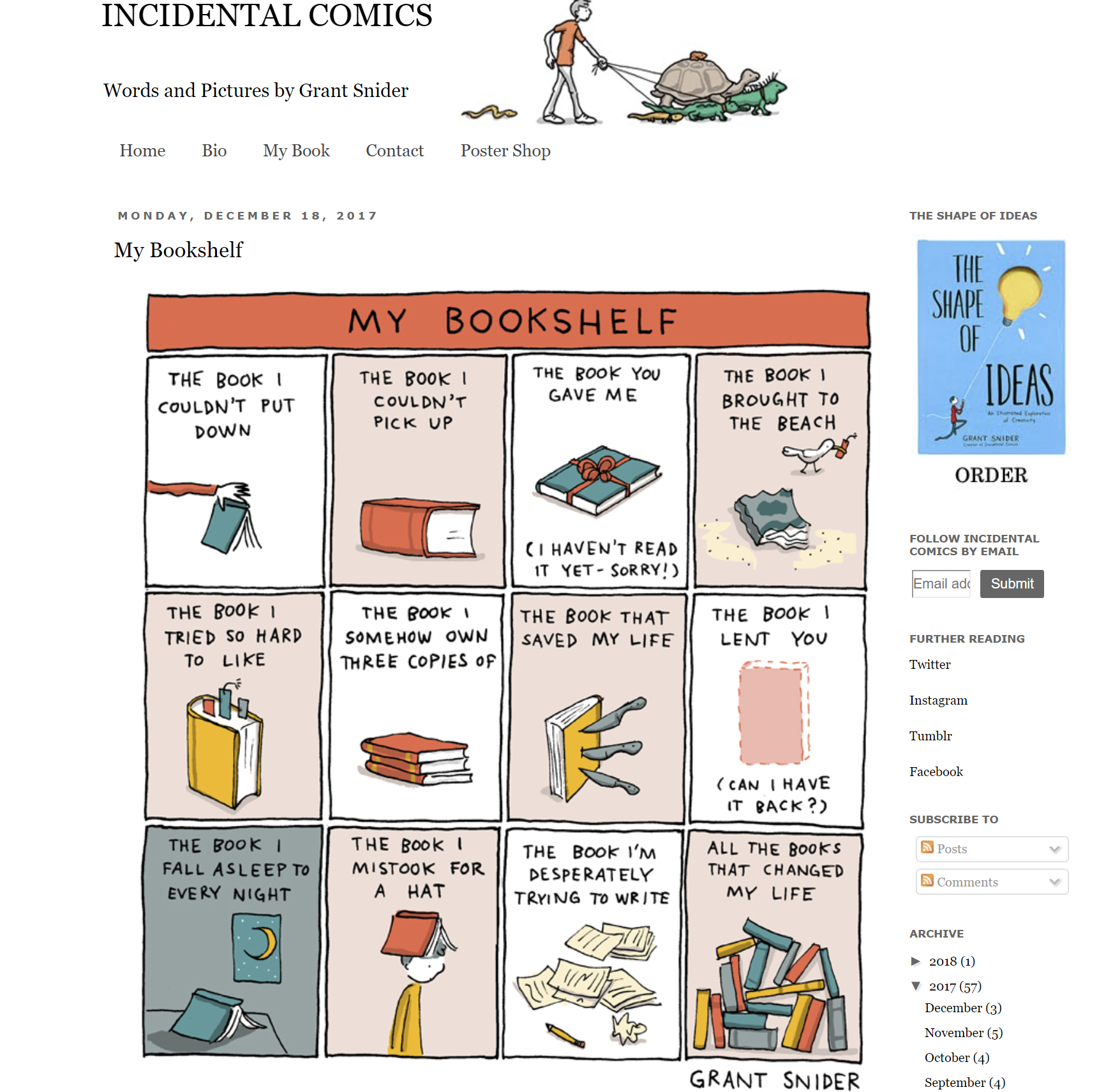 And here is my response: 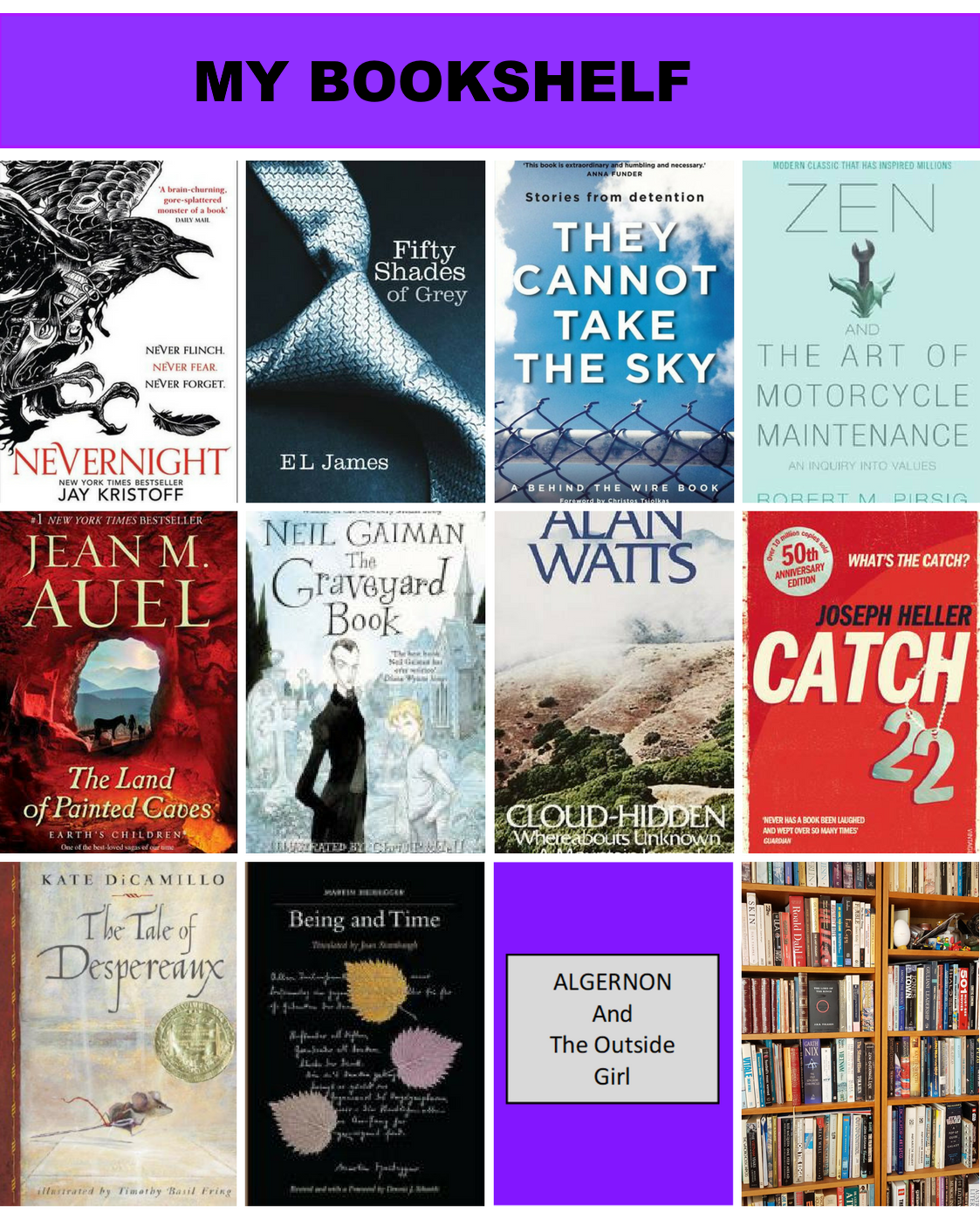 The nitty gritty in the detail…

The book I couldn’t put down – Nevernight by Jay Kristoff. Completely unexpected. The best way to find great reads and new favourite authors.

The book I couldn’t pick up – Fifty Shades of Grey by E. L. James. No-one I knew had a positive word to say about it. The biggest anti-recommendation ever.

The book you gave me – They Cannot Take the Sky (Stories from Detention) – a Christmas gift. Powerful stuff that chronicles one of the few things that make me embarrassed to be Australian.

The book I brought to the beach – Zen and the Art of Motorcycle Maintenance by Robert M Pirsig. Memories. Peregian beach. A yellow van. Cinnamon in the coffee. A small tent. Lots of books. The man I married.

The book I tried so hard to like – The Painted Caves by Jean M Auel. I loved the Earth Children series and was so excited when Book 6 came out after a ten year gap. I never got past the third chapter. I kept, and still love the others, but this one didn’t even make my bookshelf.

The book I own three copies of – The Graveyard Book by Neil Gaiman. Best. First. Page. Ever. I have the children’s edition, the adult edition and the graphic novel. Although I’m not convinced the child and adult editions needed a different cover. Unless adults are afraid to be seen reading children’s books? “There was a hand in the darkness, and it held a knife. The knife had a handle of polished black bone, and a blade finer and sharper than any razor. If it sliced you, you might not ever know you had been cut, not immediately. The knife had done almost everything it was brought to that house to do, and both the blade and the handle were wet.”

The book that saved my life – Cloud Hidden – Whereabouts Unknown by Alan Watts. Not so much saved as changed. It opened my eyes to a whole cosmos of eastern philosophy. And it seeped into my own writing. “The way of the warrior is a long walk. So many paths to travel – Buddha, Tao, Zen. We walk in never-ending circles. Round and round. Until our brains spin like goldfish swimming in a bowl.” – Samurai Kids: White Crane.

The book I lent you – Catch-22 by Joseph Heller. My treasured Year 12 annotated copy lent to a good friend who when I asked for it back a month later, insisted she never had it. Four decades later, it’s not the only book that’s never come back, but it’s the only book I regret lending.

The book I fall asleep to every night – The Tale of Despereaux by Kate Di Camillo. Truth is, I don’t read in bed at night. But this is my comfort book. The one that reinforces the value of stories for me. “Stories are light. Light is precious in a world so dark. Begin at the beginning. Tell Gregory a story. Make some light.”

The book I mistook for a hat – Time and Being by Martin Heidegger. I tackled this one on and off for years, much like wearing an old favoured hat. “The being of Being is not a being.” I loved and hated that sentence. It meant everything and nothing. It made me feel smart and stupid at the same time. It still does.

The book I’m desperately trying to write – Algernon and the Outside Girl. Actually I think it’s better than anything I’ve written for a long time so I’m not so much desperate as driven.

All the books that changed my life – Seriously? In one picture. Can’t be done. A snapshot of a section of one bookcase is the best I can do.

Sandy Writes – The Detail is a Google

5 ANZ Books That Should be Made into Movies