In my life, December 25th to mid January is new book time. At Christmas I kindly help my other half choose books for me by providing an extensive list of titles and during our January holiday I obsessively visit any bookstores within an hour-and-a-half radius.

Here are the new additions to my bookshelf and a few now pending: 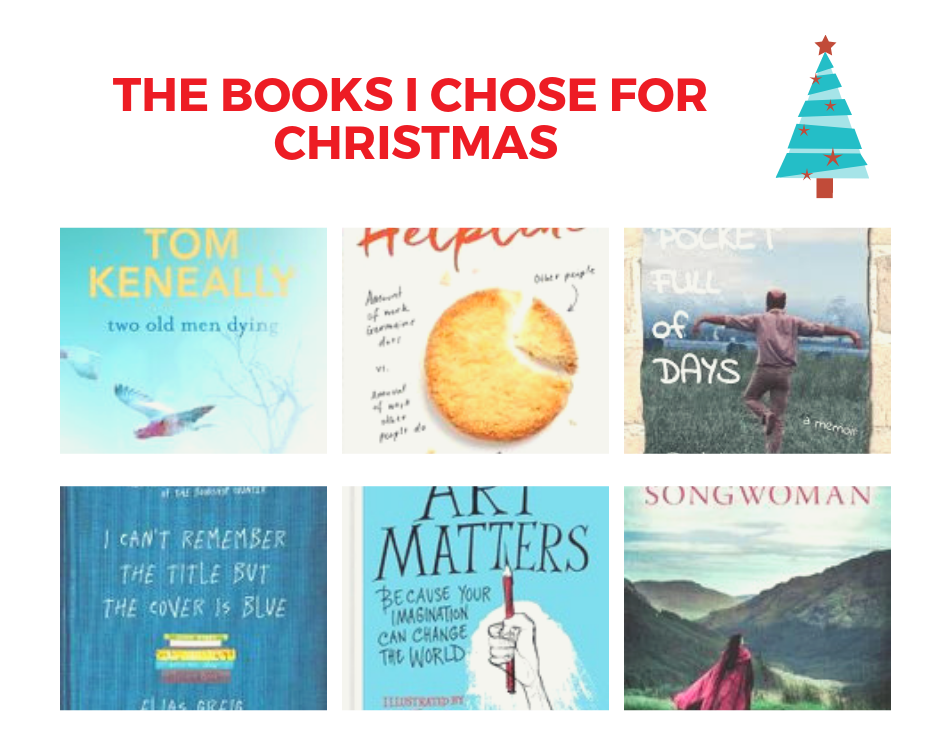 Two Old Men Dying by Thomas Keneally. I found this one of the shelf of the first ever bookshop, in my lifetime, in the Northern Illawarra. For many years there wasn’t even one in Wollongong. Collins in Thirroul is the real deal. A bookshop run by two sisters passionate about books, supportive of local authors and with an amazing eclectic range of titles.

Unfortunately my Christmas shopping was already done by the time I dropped in to the new store, but I know where I’ll be shopping in future. My other half and I broke the Christmas present cut-off rule and bought a book for each other. He chose The Travelling Cat Chronicles and I chose this one. I’m part way through and loving it. It’s about Learned Man – an imaginary  first Australian – told through the eyes of a documentary filmmaker and Learned man himself. It’s hard to explain so I’ll let Penguin’s website do it:

“Tom Keneally explores the journeys of modern Australians alongside the imagined story of ancient Learned Man whose remains were discovered in Western NSW decades ago.” You can read an excerpt here

The Helpline by Katherine Collete . I receive lots of publisher newsletters as a reviewer and this one was in the Text newsletter. it sounded funny and snippets resonated with me – a senior mathematician loses her job and her cousin finds her a new one – on the Council’s Senior Citizen Helpline. So on t0 the list it went.

A Pocketful of Days by Mike Cavanaugh. I met Mike through the South Coast Writer’s Centre where he’s a member and I’m the part-time Office Manager. He writes the funniest, quirkiest emails so at the Sydney Writers festival Live and Local event where SCWC member books are sold, I picked up his first book and read the blurb. I laughed out loud –  so I bought it and continued reading in the breaks while I was manning the book stall. At the Christmas Picnic Mike was collecting an award for a short story competition and read an extract from his second book. Everyone laughed out loud. I added it to my list. It’s not as funny as the first – quirky, fascinating and a little heartbreaking – I read it almost all in one go. Both books are memoirs and I’m on board to read the third and final.

I Can’t Remember the Title But the Cover is Blue by Elias Greig. How could this title not attract a reader for whom many of her favourite books are books about books? It was on the list before I even read the burb! Customer stories from a veteran bookseller. As Kenny Banyia says to Jerry Seinfeld, “That’s gold, Jerry. Gold!”

Art Matters by  Neil Gaiman and Chris Riddell. I’m a Neil Gaiman fan I admit it. This book contains four essays including Why Our Future Depends on Libraries, Reading and Daydreaming. What’s not to love about that. Very timely as I’m part of the Students Need School Libraries Campaign team. With Chris Riddell’s illustrations, this book is a work of art, itself.

Song Woman by Ilka Tampke. Her previous novel Skin, set in Bronze Age Wales is one of my all time favourites and I love its cover. I don’t like the cover at all on this book, but it’s also set in Iron Age Britain – and I know I’m going to love the story.

And there was a surprise book. 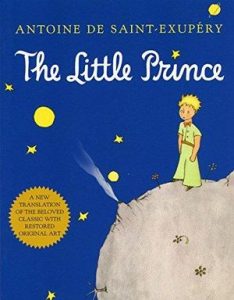 And there was a surprise book. A friend gave me a beautiful hardback copy of The Little Prince by Antoine de Saint-Exubery with a special inscription. This would have to be one of the most perfect books to give a friend. I wish I thought of it!

So that’s Christmas. Except I almost forgot, because it’s a sort of book. Friends gave me a subscription to a Cryptic Crossword magazine. I’m not good at cryptic crosswords, although I aspire to be and I’m sure it will be good for my brain. I’ve already completed the first one in the first magazine with a reasonable success rate. over 50% is a good start.

Next came holidays. A detour to Berrima was a good start. I fell in love with Berrima when I spent a week there decades ago installing a new accounting system in Berrima gaol. It has the best lolly shop. I’m making a substantial regular contribution to keeping The Lolly Swagman in business (where else can you get Butterfingers within 2 hours of Wollongong?).

During breakfast in a cafe I discovered the story of the German prisoners of war housed in the gaol during World War II. They were mostly Germans working as merchant seaman in Australia at the wrong time. Nine came of a sunk U-boat. They were allowed into town during the day and the community welcomed them. They were good for local business as many still received wages from their German employees and as German welfare was way ahead of Australia at the time, they thought nothing of paying a portion to those who had no income.  The local economy benefited. Plus they were resourceful and inventive – installed their own plumbing and flush toilet and built the town’s first generator. The recreation facility they built on the river became a tourist attraction. 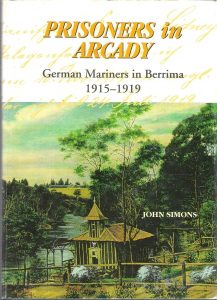 I like positive war stories where people are lucky enough to be able to choose not to be enemies. I’m also very interested in prisoner of war camps and recently finished a middle grade novel set against the backdrop of the Cowra prison breakout. The prisoners there were servicemen and incarcerated 24/7. Their culture engendered a different attitude – feeling ashamed to be prisoners. Hundreds of Japanese lives were lost in the breakout, but they kept a  pact that no civilians would be harmed. My family farm out along the Grenfell Rd in Bumbaldry so its a story I know well. The local RSL cared for the Japanese graves as well as their own and when Japan found out in later years, a strong relationship developed. The only United Nations peace bell not in a capital city sits in Cowra, a gift from Japan in appreciation of the respect shown.

I visited the Berrima Museum to learn more about the German prisoners of war and buy the definitive book Prisoners in Arcady by John Simons, a local historian. There I was told the book was out of print, that John and his wife had passed away and the remaining family wouldn’t allow any reprints. The museum caretaker kindly gave a booklet for free with an apology. eBay solved the problem. By the time I got home a week later, my book was waiting.

Our holiday destination was Bundanoon. Not all that far away but it’s the company rather than location that always makes me look forward to our annual January holiday. And this year there were alpacas! 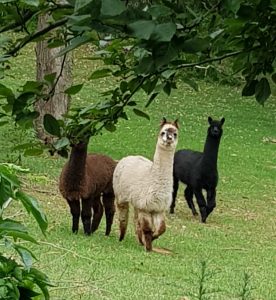 Despite the proliferation of bookstores in Bowral and Moss Vale I only bought one book. I felt like I needed to read what I already had received first, but I couldn’t resist Sagaland by Richard Fidler and Kari Gislason. Two friends with a lifelong love of the Nordic sagas visiting the Icelandic places of legend. I would love to do that but it’s not going to happen so a book is the way to go for me. 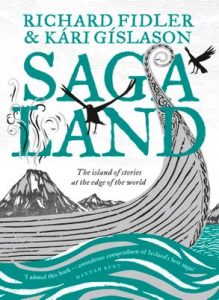 That doesn’t mean I didn’t read other books and add them to my Books To Buy Trello List. The holiday house we stayed in contained a well-stocked bookcase and there I discovered Letters to a Young Poet by Bohemian-Austrian poet Rainer Maria Rilke . I was initially attracted to it because although I knew nothing about Rilke, I recognised his name as the subject of a South Coast Writers Centre poetry appreciation event. It proved to be a wonderful work of creative encouragement. 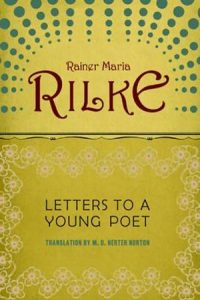 The other book I found and fell in love with in the holiday house bookcase was The Slow Regard of Silent Things by Patrick Rothfuss. I ignored the advice at the front not to read it if I hadn’t read the two books it was a side story from. I’m not particularly good at doing what I’m told. When I got to the end, the author had a note about how he didn’t think the story was publishable because it was so quirky and hardly anyone would like it but a writer he greatly admired said he had to publish it, because it was the perfect book for her and there weren’t enough books she loved. And I knew it was for people like me, too. I was meant to read it all along. Now I can hardly wait to read the other two books. I’ve added The Kingkiller Chronicles:  The Name of the Wind and The Wise Man’s Fear to my buying list.   And when I discovered Patrick Rothfuss organizes the charity Worldbuilders, which, since 2008, has raised over $7.4 million, primarily for Heifer International, a charity that provides livestock, clean water, education, and training for communities in the developing world, I was even more impressed. 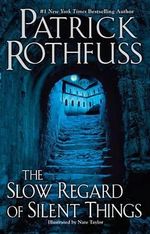 I really, really need an excuse to buy the The KingKiller Chronicle books right now.