There is only one word for the Whitsunday Voices Youth Literature Festival and that’s SPECTACULAR.

That one word covers everything from the organisation (the SPECTACULAR Sonia and her team), the kids who attended, the Year 11s who ‘minded’ the authors and illustrators, the launch function, the festival program, my speaker colleagues, the Kinders, the food, the accommodation and oh that Literary Dinner,with glitz, glamour and rock star moments in abundance.

In fact, I need a bigger, brighter, shinier word than SPECTACULAR. bring me my thesaurus! Stephen King said no writer should ever use a thesaurus but then he’s obviously never been to a Whitsunday Voices Youth Literature Festival.

Here are my personal highlights:

I’m embarrassed to admit I can’t remember all their names – but I remember lots of smiles from Sonia and Julie and Kylie and the team. Genevieve in the bookstore, still volunteering, long after her children have left the school and taking the time to knit Sad, the Dog. The lady (was it Ann?) who managed to make gluten free and vegan so gourmet we all wanted to eat those meals. I am now firmly convinced that the children’s literature angels all wear purple WAS T-shirts. 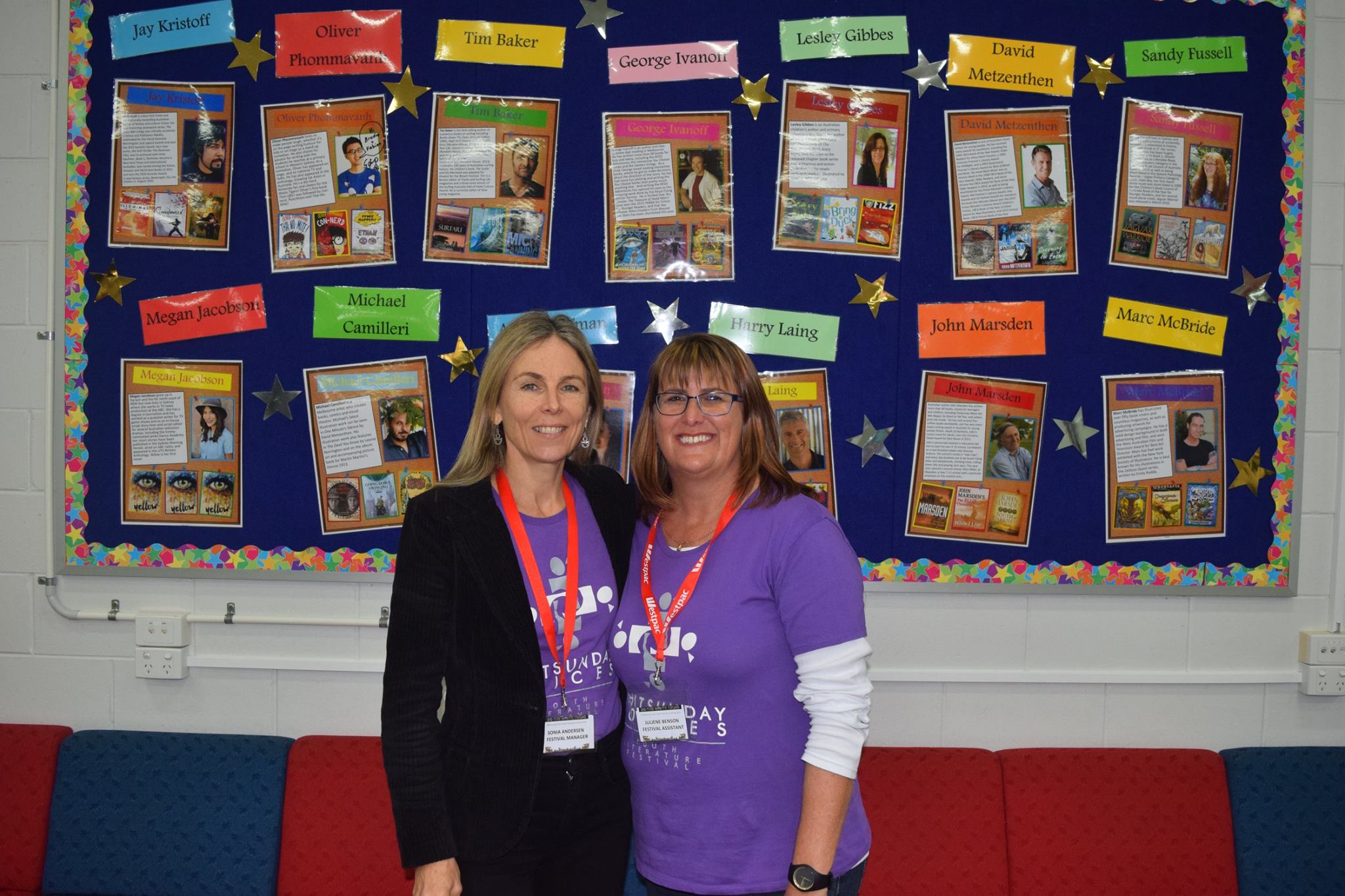 This was a classy affair from Oliver Phommavanh‘s Ninja Turtle Doc Martens (why oh why didn’t I take a photo of those but at least I found a pic on the Internet) to the yummy finger food. Every 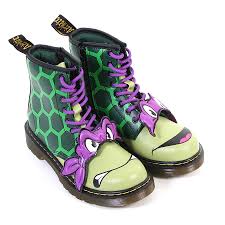 author was sponsored by a local business and this sense of community was a thread that ran through the festival. My sessions were sponsored by Kip McGrath Maths tutoring which is a perfect fit for Math loving me. Poet and all round excellent entertainer Harry Laing did a great John Marsden impersonation for the panel when the great man himself”s plane was delayed by wild weather. Megan Jacobsen, Amy Kaufmann and Jay Kristoff (who wrote this must-read query letter blog post and btw also wrote some mega books – hanging for a copy of Nevernight) were the other panel members.

Funny, clever and a talented poet, Harry had me wishing I had brought a pencil so I could start writing a verb poem and that I had a class to share his poetry with. And at the Literary Dinner, when the music started – that man could move. 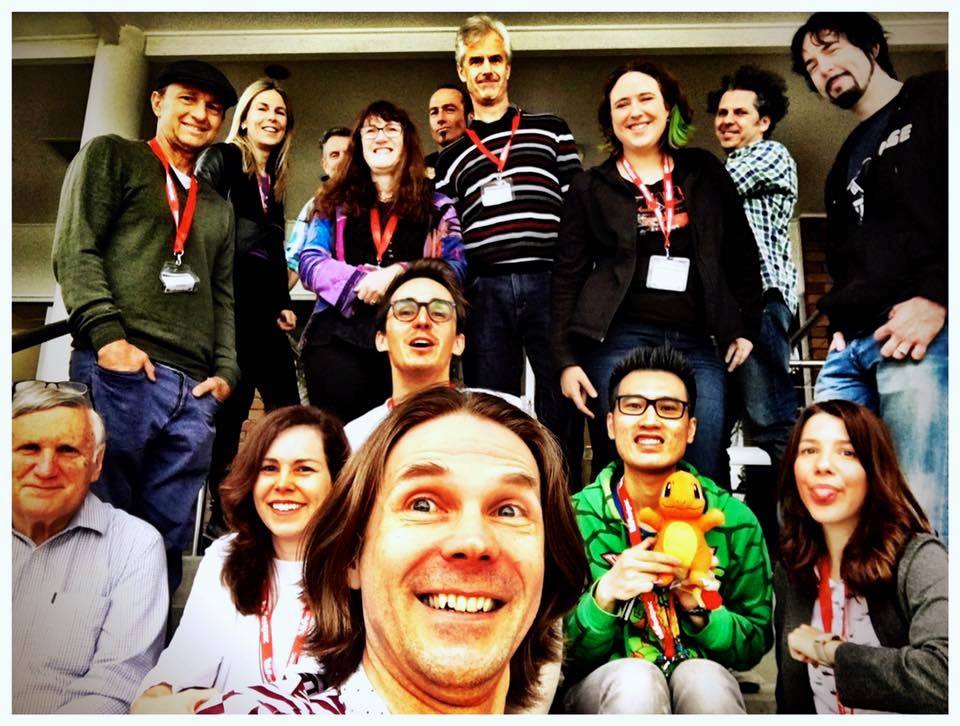 I’ve given up trying to analyse why it works so well. The writers, the non-writers and even the anti-writers once again thrilled me with the quality of their stories produced in a mere 45 minutes. Minecraft provides such a comfortable and familar story scaffold that kids are free to concentrate on improving their writing. I always feel like a big success after Minecrafting a Story even though I know the magic wasn’t me. 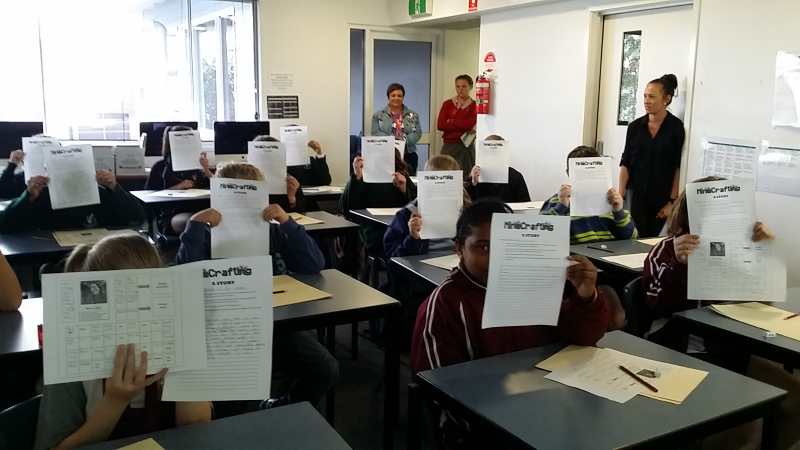 I dropped in to see Kindergarten during my break on Day 2, for a short visit to read them Sad, the Dog.  They were such fun, I stayed until I had to leave for my next session. The Kinders told me their stories about pets which was a welcome role reversal. It’s such a special thing to share time with kids on the threshold of reading and storytelling, and a bit tricky too, when their enthusiasm exceeds their mastery of language.

As any festival presenter knows, the last session is always the hardest. The kids are tired, the author is tired and if it’s Friday…

“Do you think we could finish a little earlier?” the teacher strode up and asked. “Of course,” I said, thinking they were probably all exhausted. Not so. In fact, they’d only come for this one session and despite a strict departure time for their return journey, were determined to get every child’s book signed before they left. 87 copies of White Crane. A rock star moment. Last thing on Friday. Every eye glued, every  kid engaged.

The door opened to reveal a room bathed in fairyland lights, complete with a red carpet. Hollywood eat your heart out. 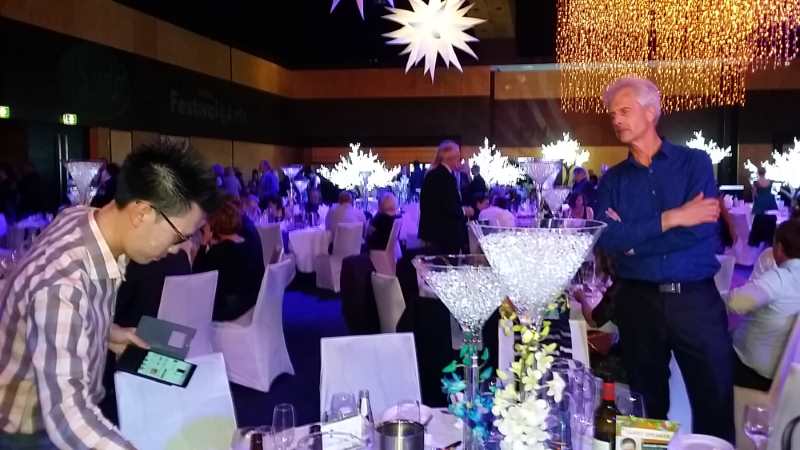 Matt Caffoe of Mashed Theatre entertained with a mix of Shakespeare and beatboxing. How does that work, you might ask? Really well. Richard Fidler told tales of enlightened and enduring Byzantium, bitter sweet and ironic, given the coup concurrently occurring at the time in Istanbul. I’ve long been a fan of Richard’s Conversations podcasts and his speech didn’t disappoint. Neither did the chocolate fountain. Or the photo booth that brought back Luna Park memories.

If there was a Dancing With the Stars trophy, it would have went to Harry Laing. The award for the biggest party animal would have been collected by George Ivanoff on behalf of the Spearow Pokemon which the papparazzi snapped swimming in his champagne .

Saturday morning I got up early and walked along the river. I caught a few Pokemon and listened to the sounds of water birds. It was restful and reflective. The perfect end.