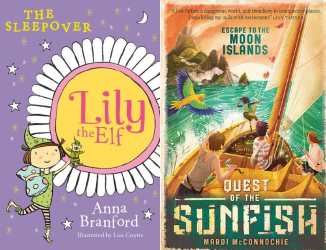 I reviewed – lots of series books for the Funday section in the Sunday Telegraph – the Lily the Elf series by Anna Branford,
illustrated by Lisa Coutts, The Quest of the Sunfish: Escape to Moon Islands by Mardi McConnachie (the first book in an exciting new middle grade fantasy series), Sage Cookson’s Sweet Escape by Sally Murphy (I can’t help but recommend a book where chocolate has a leading role) and last but certainly not least Trouble and the New Kid by Cate Whittle & Stephen Michael King.

Trouble is a dragon and his name says it all. I loved the premise of this 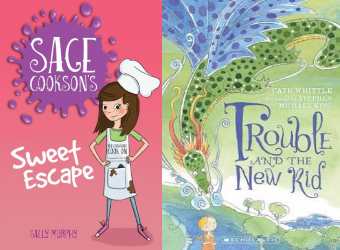 story. A dragon stole the house and even though it was defeated in a staring competition,it couldn’t give it back because it was stuck tight on a mountain. So everyone just lived together and trouble flew the kids to school and mum and dad to work. The ultimate ‘just getting on with it’approach to life. I like that.

I followed – Cates blog. I like that too – the posts and the web design.

I wrote – another chapter in Algernon and the Outside Girl.

I counted – most days I did accounting. Four sets of BAS, worked on the end of year accounts for the South Coast Writers Centre and tallied numbers until it drove me nuts. That was where most of the week went.